VC professionals involved in the Vertex network might consider themselves blessed: four partnerships have raised funds looking to early-stage deals in Israel, the US, China, Southeast Asia and India, plus two more funds focused on healthcare and growth investment opportunities. Each one is anchored by Vertex Holdings, a firm owned by Temasek Holdings, a Singapore government-backed investment fund.

Vertex and Temasek maintain that they are independent of each other, but do collaborate to help portfolio companies identify synergies, particularly for cross-border expansion plans in Southeast Asia. Temasek also selectively provides growth capital.

Formerly the corporate venture arm of engineering conglomerate Singapore Technologies, Vertex Holdings was acquired by Temasek in 2004 after an earlier network of funds broke down when the US dotcom bubble burst. It was re-launched in 2008 by a new CEO and focused on China.

Temasek was the sole LP to begin with. Starting in 2014, the various partnerships were encouraged to raise external capital and compensation system became more market-oriented, with partners awarded carried interest. However, a portion is clawed back and distributed evenly across the teams. Temasek continues to anchor the funds through Vertex Holdings but contributes less each vintage.

“It’s like a distributed computing system – every partnership decides on investment decisions for their respective funds because they raise their own money,” says Kee-Lock Chua, CEO of Vertex Holdings.

It is a formula that has precedents. In Asia, historically networks of corporate venture funds have operated semi-autonomously across markets. The most prominent examples, under SoftBank and IDG, eventually saw their teams spin out and form fully independent entities.

Meanwhile, the loose network of managers under Draper Fisher Jurvetson failed to coalesce into a pan-Asia VC franchise. Other US venture capital firms – such as Sequoia Capital, Lightspeed Partners and Matrix Partners – have been more successful in establishing smaller collections of affiliates run by different partnerships under single brands. They too have become more autonomous over time, although the parent still plays a role in fundraising.

Sequoia recently raised $5 billion for a series of seed, venture and growth funds that will deploy capital across China, India and Southeast Asia. This compares to $3.4 billion in the previous vintage. Vertex differs from these players in that it is a semi-captive unit of a government investors, perhaps the only one of its kind globally. But the firm still has expansion ambitions. Realizing them means surviving the economic impact of COVID-19, keeping the teams together, and increasing the scope of cross-regional collaboration for portfolio companies.

A VC investor that can support start-ups through the growth stages – when opportunities overseas typically come into focus – would be a valuable partner. Its returns might get a boost as well. Work has begun on this front, with later-stage investor Vertex Growth achieving a final close of $290 million on its debut vehicle last year.

James Lee, a managing director at Vertex Growth, says partners are independent from the early stage funds to ensure investment decisions are objective. In contrast, the opportunity funds or top-up funds raised by numerous other venture capital firms in recent years are usually managed by the same set of partners.

Vertex Growth’s remit permits investments in companies that have not previously received funding from a VC fund in the network. It fills a gap highlighted by the various partnerships as the check sizes for Temasek’s direct deals are often too large for Series C or D rounds. Further, Temasek likes to do due diligence afresh on every deal, which in the past has prompted some promising investees to walk away and find other sources of growth capital.

Six years ago, when Vertex began marketing to third-party investors, many weren’t sure what to make of the firm’s second act.

“Investors had to get over the kneejerk reaction as to whether they were a captive VC or not, what value Temasek brought and what negative influence it could bring, were they capable of managing third-party money for the first time?” says one source familiar with Vertex. “It was not a walk in the park by any means.”

Ben Mathias, a Vertex managing partner for India and Southeast Asia, admits the first external fundraising for his partnership took some time. Kasikornbank and Taiwan’s Cathay Life Insurance were among 18 LPs that contributed $210 million. The affiliation with Temasek was a selling point Vertex could demonstrate how it facilitated introductions to other start-ups in the network. The value of these introductions has since been validated.

“Before Vertex led our Series A round, we lost out on a contract to a rival as we are one of few start-ups in a space filled with mature enterprises. Once the round was finalized, we won over many risk-averse customers,” says Srikanth Muralidhara, founder of Indian industrial technology start-up Flutura Decision Sciences. “Temasek has invested in a lot of engineering companies in Asia and are a stone’s throw away from Vertex [Holdings].”

Other companies have received assistance in expanding beyond their domestic markets. Mobike, for example, turned to the partnership team – which is also led by Vertex Growth’s Lee – when it launched international operations in Singapore in 2017. Mobike and rival Ofo became infamous as the island nation’s pristine streets were suddenly littered with bicycles abandoned by app users. Last year, it exited the market.

The 12-person partnership team, which is a unit of Vertex Holdings, has introduced start-ups to companies across the region with links to non-Temasek strategic investors. At the same time, Vertex funds in the West with exposure to domain leaders in cybersecurity, cloud computing and artificial intelligence have initiated relationships between these companies and Asian peers.

Within the region, Vertex partners from various funds routinely share information on emerging trends in their geographies. Indian companies involved in social commerce, for example, have received insights from Vertex partners in China about how these verticals have matured.

The network’s reach has its limits. While Chinese industrial robot manufacturer Geek+ tapped the Vertex network to secure a few clients, it had to rely on a bigger player for European expansion efforts. Vertex led the Series A+ round for the Chinese start-up in 2017 while Warburg came in a couple of months later with a larger check.

Geek+ CEO Yong Zheng notes that many Chinese technology entrepreneurs have cross-border ambitions and appreciate an investor with a global presence. However, he found it easy to work with the Vertex China team because they appeared to be a highly localized and autonomous outfit. Zheng shares an alma mater with the partner assigned to the start-up.

Warburg Pincus, on the other hand, required an extended due diligence process, approval from an investment committee in the US, and onerous documentation in English. Geek+ had to employ expensive financial and legal consultants to secure the commitment, but that is the price start-ups are willing to pay for growth capital. Zheng adds that Asian entrepreneurs who attended Western universities are generally comfortable with non-local investors.

As for Vertex’s third act – and the achievement of critical mass within its operation – a lot rests on the performance of those initial funds with third-party capital.

An immediate priority is addressing the damage caused by a COVID-19 pandemic that shows no sign of abating. Vertex’s Asia portfolio includes more than 75 companies.

Choon Chong Tay, a managing partner at Vertex China, claims the firm has a degree of resilience thanks to disciplined deal-sourcing across its different markets. The focus is on start-ups that have the potential to define a new technological landscape.

The China team has backed pre-revenue deep technology start-ups like Lightelligence, which is looking to manufacture optical processing units that are more suited to the parallel computing needs of artificial intelligence solution providers. In the US, Solid Energy is developing a lithium ion battery with an extended lifespan and potential applications in next-generation consumer electronics and electric vehicles.

These are said to represent a strategy that looks beyond mobile internet-based solutions. “We have not played the valuation game, we invest based on fundamentals,” adds Mathias. “The point of raising money for a start-up is to build your business and we should not invest just to drive up valuations. A lot of high-flying unicorns have come crashing down this way.”

Indeed, some of Vertex’s bets are reminiscent of the longer-term horizon of its parent. Solid Energy, for example, was first backed by the US team in 2013 during the pre-fund era.

Industry participants observe that Temasek built the platform because it was unable to participate in early-stage deals directly. In this sense, Vertex is almost like an incubator, offering snapshots of trends and presenting late-stage investment opportunities.

“They invest in growth stage companies. For us, we are very focused on technology opportunities, but they are not constrained,” says Vertex Growth’s Lee.

Regardless, the Vertex network will need to raise more capital from a diverse set of LPs. It is necessary to retain talent, invest larger sums in promising start-ups, and ensure the distributed network avoids any temporary outage.

Returns from the Southeast Asia portfolio – which is believed to have outperformed due to Grab – have helped in this respect, serving as a bulwark as India’s ecosystem is beset by intense competition and high valuations.

Apart from Grab, a standout performer has yet to emerge from the existing portfolio, but Chua is content. Brought in to resuscitate the network in 2008, he now oversees 10 funds with $3.5 billion in assets under management.

“We were able to successfully transform ourselves and everybody sees the opportunity to collaborate across countries and work with each other closely,” he says. “I think these six partnerships will continue to raise more money and strengthen their team over time.”

Drawing comparisons with SoftBank’s most recent forays into the investment space is unfair – Vertex is not trying to be the Vision Fund. But if its decentralized network of funds operating under a single brand stands the test of time, Vertex might rank alongside the Japanese conglomerate as one of few global tech investment franchises to come out of Asia. 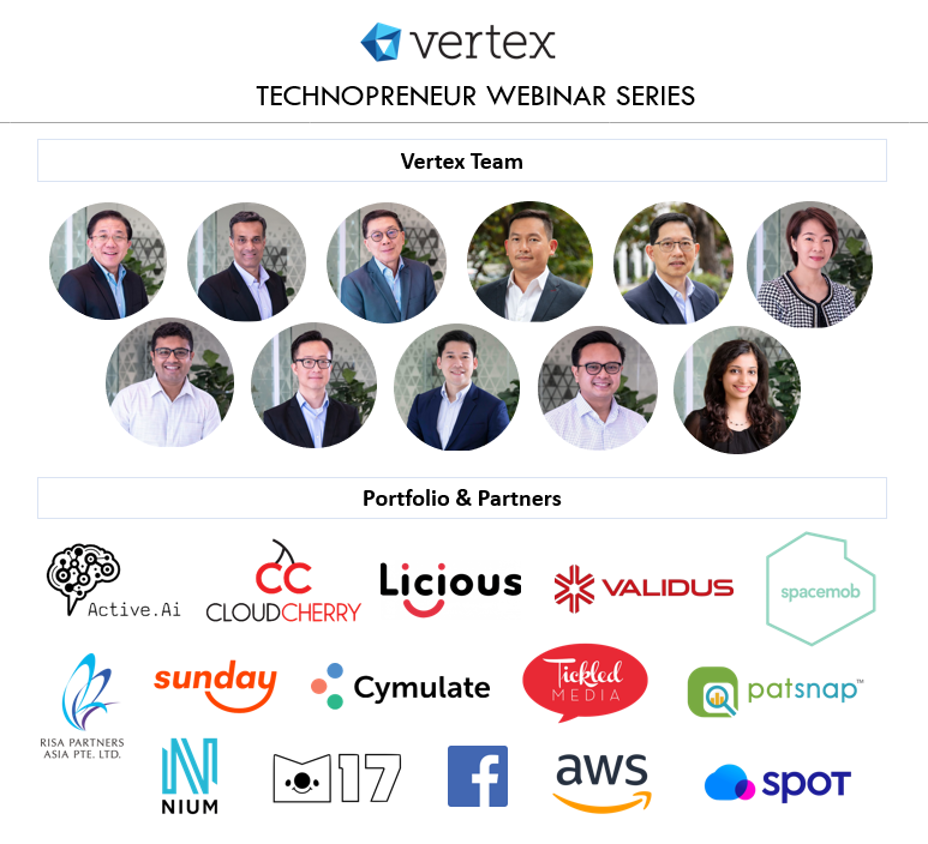 Vertex Holdings is pleased to present an 11-Part Technopreneur Webinar Series. This series aims to facilitate the sharing and exchange of ideas and insights, as well as provide fundamental understanding of the intricacies of entrepreneurship for aspiring technology founders and innovators.

Elevation Oncology, a clinical stage biopharmaceutical company focused on the development of precision medicines for patients with genomically defined cancers, announced today the launch of the Company with a $32.5M Series A financing, to explore innovative models for real-time identification, patient referral, and enrollment of patients with tumors driven by rare genomic alterations. The Series A financing was led by Aisling Capital and a syndicate of investors including Vertex Ventures HC, Qiming Venture Partners USA, Driehaus Capital Management, and BVF Partners.

TARANIS, an ag-tech startup that uses aerial surveillance and machine learning to help prevent crop-yield loss, said on Wednesday that it has raised US$30 million in a Series C round led by Vertex Growth and Kuok Group’s Orion Fund (managed by K3 Ventures).
Tam Hock Chuan, managing director of Vertex Growth said: “The adoption of Taranis’ solutions will help growers and crop consultants to detect, analyse and treat crop issues at their earliest signs, taking preventive measures with unprecedented precision. This will give them a higher degree of control over their crop yield than ever before, particularly relevant in Asia where the agriculture sector has a relatively lower yield per hectare compared to global benchmarks.”